The Sendai Framework for Disaster Risk Reduction 2015-2030 (Sendai Framework), adopted by Member States at the Third UN World Conference on DRR in Sendai, March 2015, provides a unique opportunity to build on the progress made to date and to address gaps and challenges. It is also an opportunity to align with the Sustainable Development Goals (SDGs), the Conference of Parties (COPs) to the UN Framework Convention on Climate Change (UNFCCC), and the World Humanitarian Summit (WHS), among others. Disaster risk reduction is relevant to 25 targets in 10 of the 17 SDGs, highlighting the need for risk-informed development.

While the Sendai Framework reflects many child-centred asks, there remain areas for further action in ensuring children’s rights are upheld before, during, and after disasters, and that children are actively connected and engaged at all levels. For instance, whilst children and youth participation and school safety were recognised within the Sendai Framework, other key issues regarding child protection and child participation in the monitoring and accountability of implementation of the Framework were less visible.

​Continued advocacy is needed for child-centered approaches in the implementation of the Sendai Framework and the active and meaningful participation of children in all aspects of the Framework, particularly in terms of monitoring, and within the wider context of the Agenda 2030 for Sustainable Development. 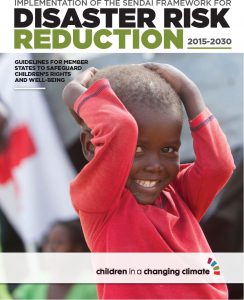